Youth Unemployment in Malaysia : The Main Contributors in this Dilemma

Youth Unemployment in Malaysia : The Main Contributors in this Dilemma

Youth Unemployment in Malaysia: The Main Contributors in this Dilemma

Recently, our Higher Education Minister Datuk Seri Noraini Ahmad made the headlines stating the Unemployment Rate for Youths (ages 20 to 24) has been projected to increase to 25% .That is a significant leap from the initial rate at the beginning of 2020 which is 13.8%. Before the pandemic outbreak, it took an average of 6 months for new graduates who are actively pursuing employment to find a professional job. The job market was filled with stiff competition as local talents and overseas talents had to compete for that one spot. Other than academic qualifications, most hiring companies were looking for additional credentials that would make the candidate stand out, such as digital skills, communication skills and outstanding interpersonal skills. Post-pandemic, fresh graduates go through at least hundreds of job applications and a duration of 8 months to a year before securing a professional job. As a result, there will be a further 75,000 unemployed graduates that will be added to the existing pool of unemployed youths.

From an overall perspective, Malaysia’s Total Unemployment Rate reached an all-time high of 5.3% in May 2020 due to the spike in Coronavirus cases. Due to the Covid-19 pandemic, local economies around the world plummeted, the global supply chain was halted and the availability of jobs was severely impacted. Today, Malaysia’s economy is on a slow rebound, with most sectors gradually opening up and business activities rescaled in accordance with necessary safety measures. Thus, the unemployment rate has improved slightly, standing at 4.7% reported at the third quarter of 2020.

The main labour force category deeply affected by worldwide unemployment, would be the youth or young adult bracket which is between the ages of 15-24. Focusing on youth unemployment, the average rate for countries in Asia would be around 12%. According to the International Labor Organization (ILO), the current unemployment rate for the labor force in Malaysia is 12% whereas our neighbouring country, Singapore, is positioned below the average rate at 9.7%.

Analyzing Malaysia’s position leveraging at the average rate of 12%, the question imposed would be what are the factors contributing to the youth unemployment dilemma in Malaysia? Hence, this article narrows down the scope to two main contributors; low wages along with the demand and supply of jobs in Malaysia.

What is the Starting Pay for Youths in Malaysia?

In 2018, there was an ongoing debate between Bank Negara Malaysia (BNM) and Malaysian Employers Federation (MEF) on the starting pay for fresh graduates.  As a result of the discussion, BNM presented real starting pay figures from the employees’ perspective whereas MEF presented nominal starting pay figures from the employers’ perspective. Real income portrays what one’s income would be able to afford at current real-time whereas nominal income is the actual salary sum provided by the employers. Overall, BNM figures were proven more accurate as it highlighted the trade-off between working and living for fresh graduates. BNM raised a red flag to the Parliament that the average starting pay for a fresh graduate with a Honours’ degree, that is RM 2,169, would not be sufficient for the increasing living cost in Malaysia. Examples of living expenses would be high rental fees, hiked prices in daily necessities and inflation rates.

From this debate, BNM successfully proved that the starting pay for fresh graduates had remained stagnant since the early 2000’s. Looking at the trade off, Malaysian youths have to be picky about securing a job that provides a reasonable salary if they want to live in a capital city like Kuala Lumpur.

Starting pay vs Cost of Living in Malaysia

Based on Bank Negara’s 2018 Annual Report, the minimum cost of living in a metropolitan city like Kuala Lumpur would be RM2,700 each month. However, most degree holders and diploma holders only earn an average salary of RM2,500 and RM2,000 per month respectively. The low starting salaries among fresh graduates lead to fast turnover rates. Thus, unemployment increases as youths run on insufficient household income.

Generally, the starting pay of most Malaysian new graduates is not enough for an affordable lifestyle even if they cut costs by using public transportation and spend economically on necessities. Rental and accommodation expenses take up a huge portion of the starting salaries, leaving a bare minimum for the youths to spend and save for the future. Other countries have managed to increase fresh graduates’ salaries by focusing on adopting a sustainable lifestyle without depending on their parents. For instance, an Audit Associate would earn an average of RM2,500 per month in Malaysia but an Audit Associate with a similar skill set would earn an average of $3,200 in Singapore.

Why do Employers pay Low Salaries to Fresh Graduates?

In a recent survey done by Talent Corporation and the World Bank, 90% of companies believe that fresh graduates should have performed more industrial training during their academic curriculum. Due to the inexperience aspect, employers tend to pay the new hires lower than market average. Most companies prefer to reduce their staff and training cost, by employing more experienced foreign talents while simultaneously incurring lower labor costs. To sustain the competition with foreign talents, fresh graduates have no other choice than to accept the low starting pay. At last, the demand for jobs (amount of job seekers) overrides the supply of jobs in the job market providing an opportunity for employers to offer low wages.

Demand and Supply Issues in the Job Market

The disequilibrium in demand and supply of the job market causes mismatch of skills to happen among young fresh graduates. In the first quarter of this year, there were only 19,000 new jobs created given the number of job seekers increased by 75,000 this year. Hence, the higher chances of mismatch of skills happen among youths causing structural unemployment. Structural unemployment can be defined as when the skills of the unemployed youths are not complementing the skills needed for the jobs available. For example, an Engineering graduate’s skills would be overqualified for a customer service job in a telecommunication company. Hence, the unemployed youth who are relentlessly applying for a suitable job according to the course studied would increase the unemployment ratio.

Structural unemployment in Malaysia often occurs among new labour market entrants such as youths based on the supply and demand issue. From the supply perspective, the jobs available in the market can be classified as skilled, semi-skilled and low-skilled jobs. Skilled jobs, or also known as professional jobs, are the jobs that attract fresh graduates the most. However, more semi-skilled and low-skilled jobs are created in comparison to skilled jobs in recent times. Due to the availability of jobs, fresh graduates take on less-skilled jobs that offer minimum wages. As proven by the Department of Statistics Malaysia (DOSM), 62.6% of the jobs filled were semi-skilled out of an overall total of 98.1% in the first quarter of 2020.

In addition to that, the supply of jobs becomes limited when the economy of a nation goes through a recession due to unexpected circumstances. Many businesses worldwide are falling into bankruptcy post-pandemic. For instance, the Movement Control Order (MCO) in Malaysia impacted jobs in the agricultural and construction sectors the most, as labour productivity declined by 8.9% and 5.3% respectively. Limited jobs create cyclical unemployment for the youths, as businesses are producing fewer jobs, reducing the demand for new hires.

Chart 1 below describes the job creation trend in Malaysia for the last two years while Chart 2 validates the correlation that fresh graduates are hired primarily in low-skilled jobs in the last two years. Even the recent STWT (School to Work Transition) survey concluded 50% of Malaysian youths in the low-skilled jobs are actually overqualified for the job scope signalling a mismatch dilemma. 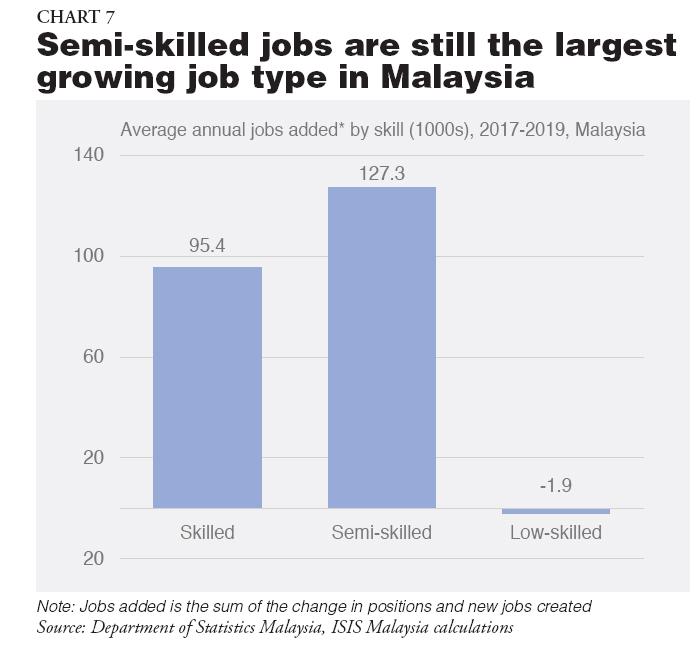 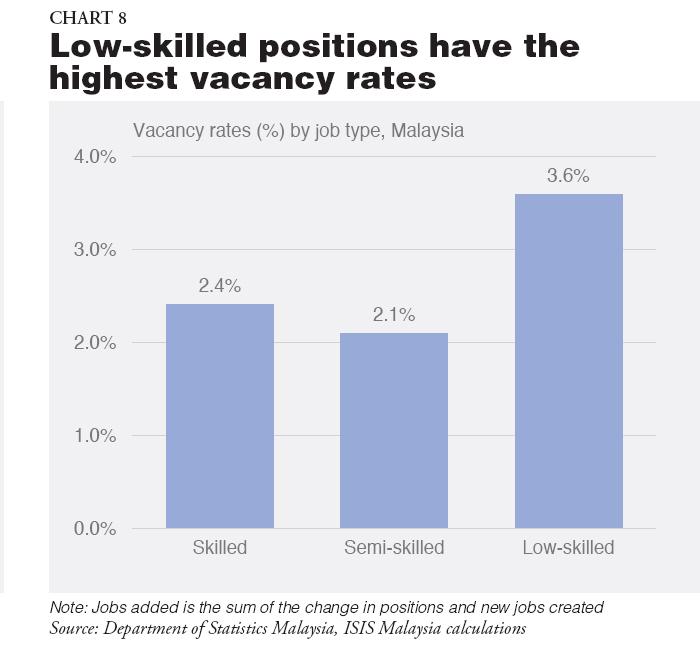 Adding on to this year’s figures, there are approximately 116,000 fresh graduates that are currently seeking employment in Malaysia. Youth unemployment is the most sensitive when responding to internal and external factors. Hence, when there are changes in a nation’s economy, the youth unemployment rate increases at a faster pace compared to the total unemployment rate. For instance, the unemployed graduates in Malaysia have doubled in numbers this year (2020: 75000 , 2019 : 41000) due to the downturn in the economy caused by the Covid-19 situation. 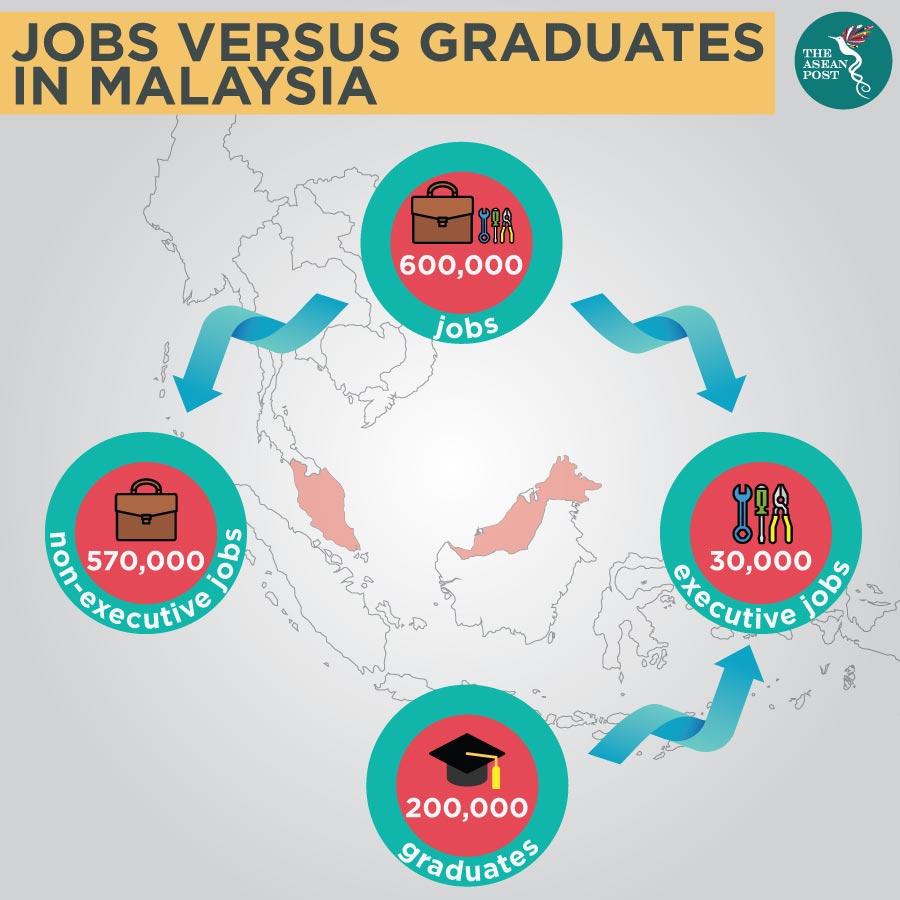 From the employers’ point of view, they hesitate to offer skilled jobs to fresh graduates as they lack certain soft skills and hands-on experience. The fresh graduates may excel academically, but they fail to produce outstanding results when they are tested in real working conditions. As proven in the World Bank and Talent Corporation survey, 81% of the companies report new hires lack in communication skills (soft skills) while 80% of the employers conclude the university curricula are not representing the actual practical experience.

In a nutshell, the high demand from jobseekers towards a limited supply of professional jobs in Malaysia, is resulting in a mismatch of skills and high turnover rate among fresh graduates.

This article has discussed the two main factors contributing to the youth unemployment dilemma in Malaysia. Low wages and limited opportunities due to demand and supply issues have made many young Malaysians pessimistic about their future. Some have even started looking for job opportunities in foreign countries in hopes of higher wages and secured job stability. Without youths, Malaysia would not have a sustainable progression in the coming years and possibly have negative growth in comparison to other countries.

Now is the time for the Malaysian government and responsible parties to work together in addressing the youth unemployment dilemma. One of the initiatives would be establishing better upskilling and training programs for the young people. The government must streamline their TVET ( Technical and Vocational Education and Training ) programs and increase the accessibility of these programs to youths. TVET programs could emulate another country’s policies to be adjusted into the Malaysian framework. For example, “Industry Skills Council” in Singapore invites multinational companies to provide insights to youths on the best type of training and skill set needed according to the job scope and industry. Another effort to address youth unemployment is the government could work with the private sector to create more skilled jobs with proper wage appropriation. In conjunction with that, the government can place hiring experts in local employment centres that can bridge the gap between fresh graduates and private employers.

Looking at Budget 2021, I do think certain suggestions that were put in action by the current Malaysian government look promising. The establishment of the National Employment Council will monitor and regulate the creation of jobs, promising a total of 500,000 new jobs next year. Besides that, there is a budget of RM 2 billion allocated for the upskilling and training programs for the unemployed next year.

I hope this gives hope to all the youths that a better, and more promising future is ahead of us!

Read More
The Misuse of Statistics
Submit a Comment