Recently, millions of Malaysians rejoiced over the Government’s announcement of the procurement of the Covid-19 Vaccines. Thanks to YB Khairy Jamaluddin and his team, an approximate of 26.5 million eligible citizens (82.8% of Malaysians) will receive the vaccine for free and to our surprise, immigrants, including undocumented immigrants will receive those vaccines for free with the government’s guarantee to not apprehend those undocumented immigrants to encourage them taking the vaccine. With the recent announcement by Malaysia’s prime minister, Tan Sri Muhyiddin Yassin regarding PEMERKASA initiative, the government has allocated another 2 billion ringgit to expedite the vaccination program by the end of the year.

While we collectively enjoy these benefits, we must be aware that not every country is as privileged as Malaysian. There are a few dozen countries that overly exercise their privilege which indirectly leads to discrimination against unfortunate nations.

According to People’s Vaccine Alliance (a network of organizations including Amnesty International, Oxfam, and Global Justice), rich countries which represent only 14% of the world’s population have acquired at least 53% of the most promising vaccine, the Pfizer-BioNTech. For example, Canada has procured vaccines exceeding as much as 5 times its population (as of February 18 2021) while at least 130 other countries have not even received their first doses, as per United Nations Secretary-General, Antonio Guterres.

Rich nations have been signing covid vaccine deals with prominent manufacturers (Pfizer and Moderna) at a time when they are unclear of the efficacy of those vaccines. Hence, they signed multiple deals which ended up leading to the over-supply of vaccines. In addition to that, vaccine manufacturers are giving out vaccines to nations that made these deals first because they were the highest bidder so they would get priority slots, ergo poor nations are lagging behind. 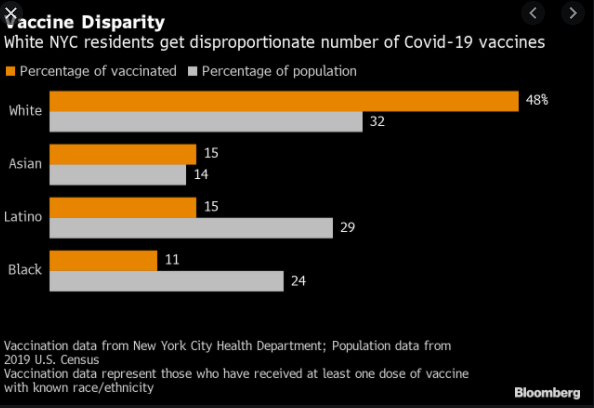 South Africa, which is one the countries worst-hit by the Covid-19 pandemic in the continent, is buying Oxford’s AstraZeneca vaccine and would cost $5.25 per dose- nearly two and a half times the amount paid by most European countries. It seems unfair as to why a poor severely covid affected country needed to pay more than those higher income European countries. To think of it, it is rather inhumane, given that the lives and livelihood of innocent citizens are at stake. South Africa’s deputy director general of health, Anban Pillay explained it was because those well-off nations have invested in research and development, hence the discount. Bilateral deals between wealthier governments and vaccine manufactures have also resulted in price rises and lack of supply for low and middle income countries. However, opposition groups have rebutted that the country’s leadership incompetency had led them to an adverse vaccination situation. While a trade union and human rights group from that country have plans to launch a litigation suit against the government. It has become haywire and saddening considering the fact covid-19 is more dangerous there due to its new coronavirus variant.

Further up north, we have the Israel-Palestine issue. As of right now, Israel is leading globally for the number of doses per head of population which is more than 108 doses out of every 100 people meanwhile its neighboring country, Palestine is struggling with its vaccination drive. According to the Palestinian Central Bureau of Statistics, around 130,000 Palestinian workers are entitled to receive vaccination from the Israeli government with many of them crossing over the West Bank border on a daily basis. On top of that, Palestinians who reside in East Jerusalem are entitled to also receive vaccination because they have been paying Israeli tax and are insured under Israeli health insurance.

With that being said, vaccination rollout in West bank and Gaza is currently stalling with 10,000 doses of Russian-made vaccine, allegedly Sputnik V has arrived and 20% of it have been sent to Gaza whilst an additional 20,000 doses of vaccine have been donated by the United Arab Emirates. This could be due to logistical restrictions imposed by Israel and Egypt since Hamas presides over Gaza. The conflict isn’t superficial and does go beyond that with the United Nations human rights body that believes that the accessibility of vaccines for Palestinians in Gaza is under the responsibility of the Israeli government. However, Israeli health minister claims that according to the Oslo Accords, Palestinians have to take care of their own health. This has become a geopolitical issue and cant be resolved overnight with millions of lives at risk due to not getting basic healthcare.

Covax is a scheme led by the World Health Organization with helping hands from the Global Vaccine Alliance (Gavi) and Coalition for Epidemic Preparedness Innovations (Cepi) to facilitate more than two billion doses to people in 190 countries in less than a year. They want to ensure poorer countries around the world have access to vaccines like those wealthier countries. They estimated that a funding of $8billion is needed to ensure the program runs smoothly. The US under President Biden’s administration pledged to contribute $4billion to the cause. Even if the Covax’s target are met, it would not be sufficient enough to end the pandemic. As stated by WHO, at least 70% of the global population need to have immunity to stop the pandemic as poor nations such as Palestine, Cambodia and Angola whose vaccination schemes depend on Covax.

While poor countries are struggling with securing vaccines, rich countries such as China and countries in the European Union are working on Vaccination Pass. Basically, vaccination passes are passes issued by each government to those vaccinated people. This is to allow holders to travel freely and work like the other vaccination passes against yellow fever. However, as of right now,it seems too good to be true. Such as China’s version of vaccination passes allowing only access to those who had been vaccinated by Chinese vaccine while most rich nations used vaccines from Pfizer and Moderna. In India, they are providing their own vaccine to the African Union but unfortunately, they are not able to supply Covax yet as they are still waiting for regulatory approval from WHO. Ergo, the unsystematic and anti-regulatory framework of issuing vaccination passes may be the reason why it cannot succeed.

The States does not have plans to issue vaccination passes. However, it may be better that way for the time being due to their well-known systemic discrimination, where caucasians are likely to get vaccine shots earlier compared to their ethnic counterparts. If businesses need to record and store data regarding worker vaccination, ample amount of time and money need to be invested in order to safeguard the data or otherwise repercussions could be heavy as data protection is breached. While this is happening, poor nations are still thinking of procuring vaccines and may be at risk of a new mutation of the Covid-19 virus variant like the ones that have been emerging  in South Africa.

There is a clear and concise disparity between rich countries and poor countries. Wealthy countries putting their own citizens as their main priority could warrant a moral issue if it indirectly results in deprivation of vaccination in poorer countries. Initiatives by the United Nations to ensure poorer nations have equitable access to vaccines should be applauded but everyone should also take note of the reason why rich countries buy and hoard their vaccines, as they don’t have moral obligations towards poorer countries. With that being said, the least we can do is to join forces as a community by complying with the health guidelines to curb this pandemic.

The National Car : To Be or Not To Be

Read More
The National Car : To Be or Not To Be
Submit a Comment