Covid-19 has significantly disrupted Malaysian businesses’ day-to-day operations stemming from a reduction of the overall consumption rate due to lockdowns and declining consumer confidence. What followed was an unavoidable chain of events — as businesses collapsed under financial pressure from outstanding debts and the absence of financial buffers, job supply in the market decreased. This then again led to further reduction of consumer’s spending power. The vicious cycle continues.

Youths who are about to graduate today are most impacted by this pandemic as they face a more competitive job market in the next 2-3 years, competing not only with those from their cohort but also against those who are presently unemployed. What directly follows is a spike in youth unemployment right when experiences in this turbulent time will be most valuable in the future. As a result, those who are graduating today face hampered salary potential throughout their entire career.

We recommend 4 policies aimed towards reducing frictional unemployment and upskilling youths who are unemployed today:

(4) More “PRIHATIN” for both youths and employers.

Where are we today?

Malaysian youths are struggling to find jobs but employers are reluctant to hire them.

Youths are facing difficulties in securing a job amidst the Covid-19 pandemic as employers seek to cut staff and limit recruitment, resulting in a more competitive job market. Even before the pandemic, youths entering the labour force were deemed unskilled and unprepared by Malaysian employers. A survey conducted by the World Bank and Talent Corp in 2014 showed that 90% of Malaysian companies believe job applicants needed more industrial training and 81% highlighted that job seekers particularly lack communication skills. Furthermore, a further 80% of employers think that Malaysian university curricula did not effectively reflect their actual abilities (i.e. GPA does not reflect actual work ability).

However, employers are not all to blame. With fragile balance sheets, survival remains a top priority for most Malaysian firms.

Following the Movement Control Order (MCO) in March 2020, businesses have been closing down throughout the country (c. 4,820 as at end-July). Average household consumption is down c. 55% (from RM6,317 to RM2,813) according to the Department of Statistics Malaysia (DOSM) and several categories saw large decline, such as spending on clothing (90% from RM135 to RM7 per month), entertainment and recreational activities (71% from RM200 to RM58 per month). This led to declining revenue for many companies with high future revenue risk, even at present. As a result, firms resorted to reducing the size of their employees to ease operating costs. Particularly for SMEs (c. 98.5% of Malaysian business establishments) wage payment could be a bigger problem as they generally have lower financial cushion to overcome the recession.

Chart 1: Average household expenditure before MCO vs during MCO

Debt servicing is particularly a critical issue for SMEs. Many of them face bankruptcy and permanent loss of business especially once the moratorium is over. According to the National President of the SME Association of Malaysia, Datuk Michael Kang Hua Keong, as many as 40% of businesses were expected to close down if not for the government stimulus package, however, it is expected that 20% of SMEs will still go bankrupt even with the financial support received. The net effect is an increase in the unemployment rate particularly for the lower-income earners employed in SMEs.

Recessions disproportionately target youth when it comes to unemployment. 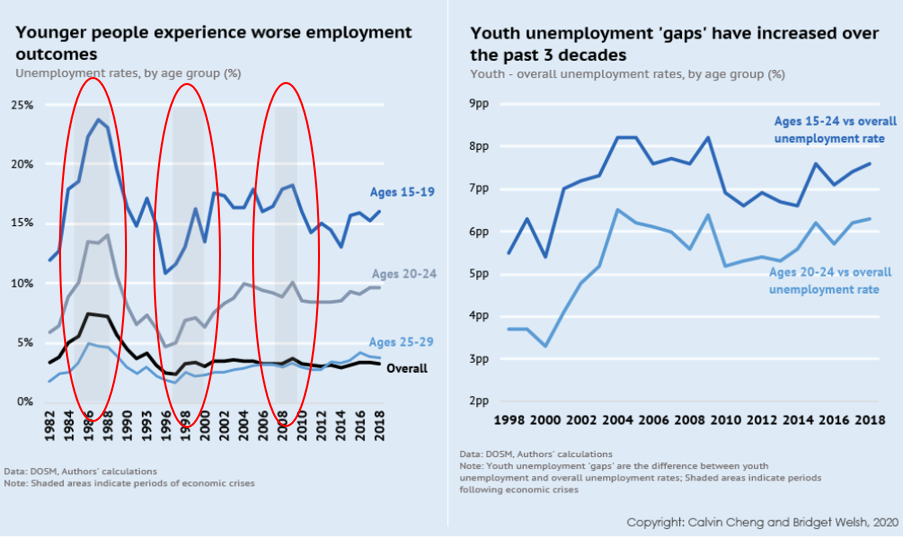 With job supply on the downtrend and yet to bottom, youths face an increasingly intense competition in the labor market

The number of graduates entering the labour market is on an uptrend as total graduates in 2019 has increased by 7% (Chart 3). However, according to Bank Negara, job vacancies have been declining since 2017, leading to a disparity between job supply and demand. According to Malaysian Institute for Economic Research (MIER), the pandemic will continuously apply downward pressure on the job market in Malaysia until mid-2021. 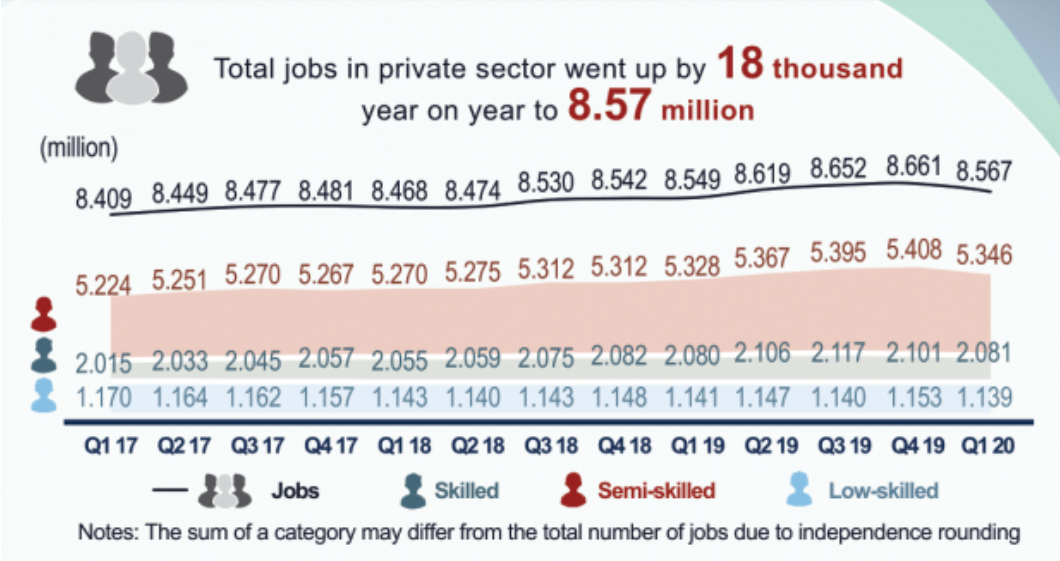 Those who can find employment today, wages are not enough to cover living expenses (true even pre-pandemic)

The Malaysian Employers’ Federation (MEF) stated that unemployed graduates expect unreasonable starting pay. According to Jobstreet Malaysia’s survey in 2019, the average fresh graduate could expect a salary within the range of RM1,949 to RM 2,836. According to another study,  the School-to-work Transition Survey (SWTS) suggests that graduates with a degree earn less than RM 3,000 while graduates with diploma earn less than RM 2,000. SWTS concludes that most of the unemployed degree holders in Malaysia can only expect a salary of RM2,500 and more than 60% of the diploma holders can only expect less than RM2,000.

According to Bank Negara, however, a working adult has to earn at least RM 2,700 to survive the cost of living in Malaysia. Let’s look at our neighbour. In Singapore, a working adult has to earn at least $1,286 (excluding rental) to sustain an affordable living. But, most degree holders there earn at least $3,600 as their starting pay (3x the cost of living). Hence, most Malaysian unemployed youths either start their careers with a deficit income flow or tend to perform additional informal jobs to make ends meet. Chart 7 outlines the job market in Malaysia even before the pandemic. 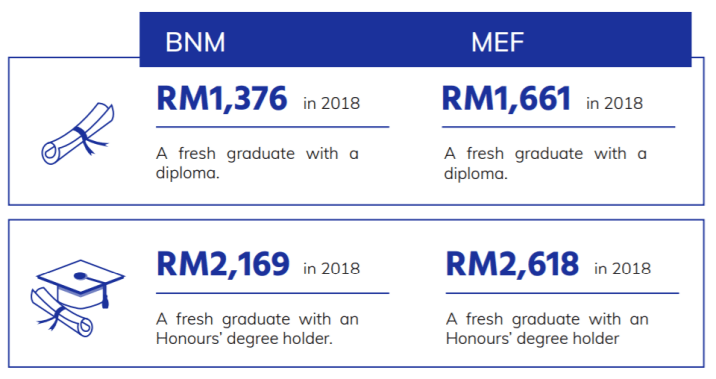 Additionally, today’s graduates will earn lower wages than their non-recession peers throughout their entire career.

The lifetime salary potential of those who are unemployed will deviate from those who are employed during a recession. According to Lisa B. Kahn, an economic professor from Yale, those who graduate into a recession face an initial salary potential loss of 6% to 7% for every 1% increase in the unemployment rate (vs non-recession graduates),  and up to 2.5% of wage loss 15 years later on. Putting it into perspective, students that graduated during the previous recessions are earning less than 10% of what they could be earning absent the recession. A study by the Royal Bank of Canada on the consequences of Canadians graduating during the 2008 financial crisis also revealed similar results. Furthermore, the study showed that recession graduates have lower odds of achieving a management position today (10% vs 12% of non-recession graduates) and are more likely to take unskilled jobs. 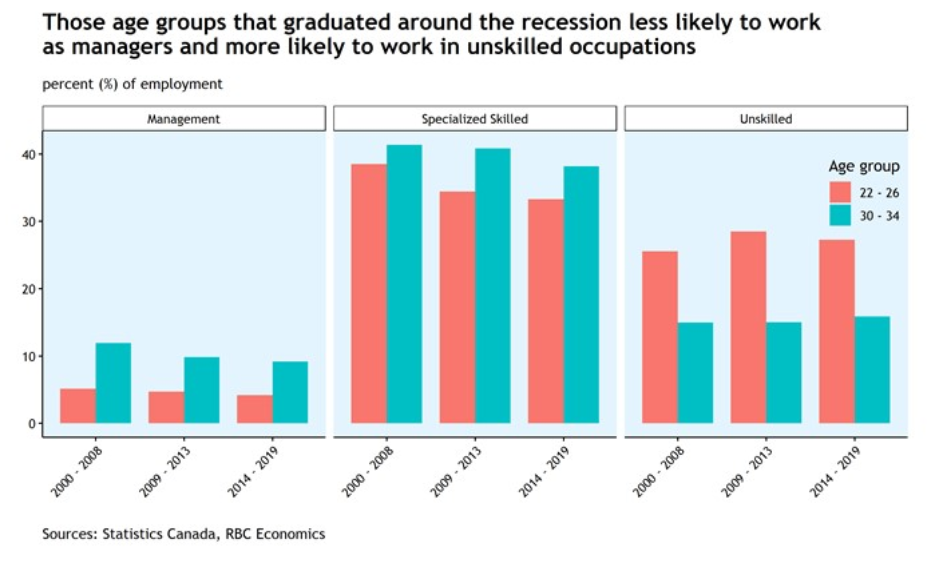 Malaysian graduates are already desperate as they were willing to take a lower starting salary of RM1,500 back in 2019 due to difficulties in securing a job (youths unemployment trending upwards since 2014). With the pandemic today, the expected starting salary of the fresh graduates coming into the workforce could even decline further. While we lack data for Malaysia, comparisons exist overseas in Hong Kong and the United States where salary cuts post-pandemic coincided with increased unemployment rates. According to a recent study in Hong Kong, most employers in Hong Kong have cut down job vacancies by at least 50% and offered salaries 20% lesser than pre-pandemic levels.

We recommend 4 policies aimed towards reducing frictional unemployment and upskilling youths who are unemployed today:

To bridge the gap between job seekers and employers, we recommend establishing federally-run employment centers across the country. These centers will be responsible for guiding and linking job seekers with potential headhunters and/or the corporate HR team of potential employers. By registering with the employment centers, the firms are able to cut down the interview process hence saving overhead costs.In addition, tax rebates could be provided to firms that register with the employment centers instead of job search portals like Jobstreet.com.  Besides that, these centers should be responsible for compiling labour-related data (demand and supply) into a centralised database, and leveraging this database to improve job matching efficiency.

New Zealand has successfully established such centers in the early 2000s and consistently depended on them during times of crisis (including today). In their centers, advisors are appointed to manage and cater each individual youth’s needs and skills. These employment centers link job seekers to potential employers via phone calls or other online communication tools. Additionally, under the recently launched “Keep New Zealand Working” initiative, their Ministry of Social Development created an online recruitment portal which provided a database of unemployed local youths in each vicinity to the nearest employment centers. These centers also acted as their headquarters for employment-related emergency task forces established during times of crisis to coordinate nation-wide efforts.

Malaysian Technical and Vocational Education and Training (TVET) centers, especially private providers, are severely underfunded, limiting their ability to cater the demand for their services. According to the Malaysian TVET Forum in 2019, TVET enrolment for secondary school leavers in Malaysia is 10%, lower than many other developed countries such Germany and Switzerland at 60%. In Budget 2020, RM5.9 billion was allocated to fund these programs in the country. However, 95% of this was received by public TVET centers, while funding for private sectors TVET continued on their multi-year downward decline. Due to lack of funding, the number of private TVET centers in Malaysia fell from 876 to 517 centers from 2015 to 2020.

Furthermore, private TVET centers students will have to self-finance their studies often by PTPTN loans. However, high demand for TVET PTPTN assistance resulted in quota restrictions on the number of students private TVET centers absorb. This currently stands at 20,000 students despite then having the facilities to accommodate 60,000 according to the Federation of Accredited Centers of Malaysia.

Germany has implemented a range of successful TVET programs which Malaysia can emulate. High school students there are able to apply to firms for temporary paid positions and enrol in a curriculum specifically designed to meet industry demands. The program also encompasses over 350 different career paths that require specialized skills, from automotive engineering and finance to retail management. It has been widely credited with keeping the county’s unemployment rate low after the global financial crisis and today at 5.6%, unchanged.

We see a lot of value from a nationwide upskilling program leveraging on existing TVET syllabus but with a shortened apprenticeship duration of 6-12 months (vs existing 18-36 months) for those who are unemployed today. This allows students to improve their marketability when they reenter the job market, and improve their long-term salary potential. Employers’ inputs in this program will be crucial specifically to ensure that the syllabus meets their demands and expectations. A well-funded training program alongside consistent firm participation will help prepare youths to acquire the required skill set.

Across the causeway, Singapore has recently announced a major reskilling program in their Budget 2021 speech. Through the Workforce Singapore (WSG) agency, those working in the most negatively impacted sectors during the pandemic are eligible to be trained and redeployed to new or higher-value roles through five reskilling programmes. Furthermore, employers who participate in these programmes will receive wage subsidies and training support by the government.

Under the current PRIHATIN stimulus package, a special grant worth c.RM2bn is made available for eligible SMEs and their employees. We hypothesise that an increase of these incentives (particularly on wage subsidies) and widening of its reach will reduce further job cuts. But we believe further incentives should be conditional on employers’ not reducing staff headcount for a period of one year. The total sum of incentives provided to each firm should also be structured based on the nature of work and the size of the company.

On the cash assistance front, we propose a qualification period of 6 months of full-time unemployment with a track record of active job searching to be eligible for further incentives. This allows graduates who take up part-time jobs to not be exempt from the program while eliminating gap-year applicants from the program.

Rationalising the Behavioural Anomalies of COVID-19